Child 1 is leaving. We're packing her suitcases and The Dog is all sad and mopey. The Dog gets sad and mopey whenever she sees suitcases. I suppose she's not as stupid as we think. Last weekend when Husband and I went to North Carolina for his friend's wedding, The Dog was extremely mopey and puzzled but the children stayed home with her so it was alright.

Speaking of the wedding, apparently dancing with glo-sticks is a real thing and not just on TLC on all those wedding shows. Also, since Husband's friend served with him in Afghanistan, there was a lot of reminiscing and some talk of the explosion. Husband says he doesn't have PTSD, but I must because I had to get up and leave in order not to start sobbing right there at the table. I haven't felt like that in a long, long time. I like these friends a lot, so somehow I have to figure out how to hang out with them and not burst out into tears at the first mention of explosions and dust and guns.

I know. I don't blame her either. If you remember, I was routing for Hawaii all along. But now that it's actually happening, I'm extremely sad. Preparing for this day for 18 years doesn't help any, in case you were wondering. It still feels like someone is peeling my skin off bit by bit. I don't like it. I do realize that my job as a mother is to ensure that the children grow up and launch successfully into the world, but now that point in time has arrived, I can't help but wish it had taken a little longer. Someone at work asked me if I could have any superpower in the world, what would it be and I didn't hesitate a second before replying "stopping time."

There was a movie on TV a long time ago called "The Girl, the Gold Watch, and Everything." I'm sure it was an awful movie, but since I saw it as a kid, I thought it was awesome. It had that girl from "Mork & Mindy" in it.

Anyway, this watch could actually stop time for everyone but you. So you could just halt time and do what you wanted, and while in the movie they used it to make money, I would use it just to look at the children for as long as I wanted without them saying to stop staring at them and what is wrong with me and is there something the matter with their hair?

There is nothing wrong with their hair. The only thing wrong is that they are growing up and I'm not a fan of that.

So you know what else is not better than a brownie? Bees. In your ceiling. 50,000 of them.

Now, I am allergic to bees. They are a big enough problem for me that my allergist prescribed an epi-pen that I am supposed to carry around in case I get stung. So I think I would, no, I know I would have noticed if there were 50,000 of them living in the ceiling of my apartment. But apparently this woman in Queens did not. Not the constant humming or the smell of honey which must have been strong because beekeepers removed 17 huge honeycombs. So here's to you, Bee Queen, for not letting a few bees bother you. If you had been Child 2, you would have screamed at the top of your lungs every time you saw one and that nice farm in upstate NY would not have 50,000 new residents. Really. The bees were sent to a big farm with a lovely meadow where they can play all day. At least that is what they told the lady in Queens.
Posted by Jen at 8:02 PM 1 comment:

I'm blogging on my iPod because I just can't be bothered to turn on my computer. I'm working on 3 hours of sleep. I keep having nightmares about bidding. Because bidding is a nightmare. Really. So now in addition to fixing problems in Africa that I didn't create, I get to beg people to give me a job. Ugh.
And The Dog injured her back, so now we have to carry her up and down the stairs. And she is one fat dog, and doesn't like to be carried, so you can imagine how much fun that is. The children are already arguing about who has to carry The Dog. The only good thing is that she is in too much pain to go in my closet and eat my shoes.
So you know what is not better than a brownie? A tick that makes you allergic to meat. Yep. There is a bug that can bite you and make you have an allergic reaction the next time you have a piece of bacon. It's only a matter of time. Who wants to start a pool? I'll put 10 bucks on May 2015. Because all I really have left is bacon and it would be just like fate to take that away, too.
Posted by Jen at 6:02 PM No comments:

So I got an email last week that asked me to take a cougar to lunch. It literally said "Take a Cougar to Lunch" in the subject line, which threw me for a bit. But it's a little less risque if you know that my college mascot is the Cougars and this was the Alumni Association asking me to take a student to lunch to tell him all about my job because he was in DC and is interested in the Foreign Service. So being a dutiful Alumna, I invited him and his wife over for dinner because I don't have time to eat lunch. There is a lot happening in Africa at the moment. Last week, my boss's boss's boss actually gave me until 3:30 on Thursday to fix Africa. OK, not the whole continent, but this one issue, and I did. I actually made a plan to fix it that was finished by 3:30 on Thursday and people liked it and are following it! I know. I was totally surprised, too. Why 3:30?

But anyway, I had this student and his wife (don't judge, he's in a graduate program) over for dinner to tell them about the Foreign Service and we ate Korean food which I cooked because you cannot get good Korean food that is gluten free at a Korean restaurant. I know. I tried last week and it was rather a disaster and Child 3 and I ate unseasoned chicken and rice while everyone else ate delicious Korean barbecue. So anyway, after working all day to fix Africa, I rushed home, ran to the international market down the street, bought a bunch of Asian food including beef and pickled radishes and rice cakes and we regaled this young couple with tales of life in the Foreign Service. He seems rather keen and she seems a little reluctant. However, I think she was reassured by our "normal" children who ate the rice cakes and talked about how much they loved China, and seemed very smart and cosmopolitan. We totally fooled them!

Here is a picture of the pickled radishes which Child 2 is apparently addicted to. Also we had mango. Oh how I love fresh mango! 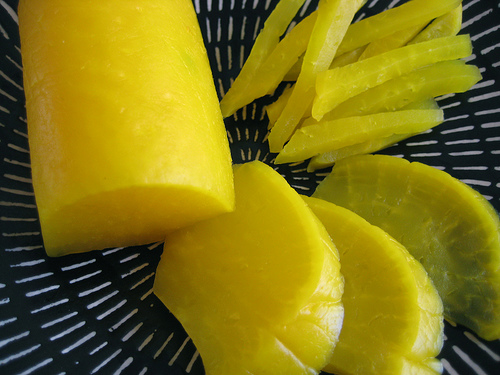 I know you are wondering why I would invite some stranger over with his wife and cook them food on a weeknight when I am tired from fixing Africa. (OK, you PCers. That is a joke. I can't fix anything and there are large parts of Africa that are just fine. And I really love Africa so stop judging.) But the reason is that when I was a newlywed and Husband and I lived in Armpit, Asia and it tried to kill me, there was a nice Foreign Service couple who had us over for dinner and fixed us something with jasmine rice and I couldn't get over how delicious that rice was. And they were nice to us just because they were nice people and I have always wanted to return the favor. So I did. And also we discovered peanut butter rice cakes, so it was a win for everyone.

You know what is better than a brownie? A good laugh, in public if possible. Emma Watson obviously agrees.

You see, there is a really not very bright politician in Turkey who said that women should save their sense of humor for their private lives and it isn't modest to laugh in public. So Ms. Watson posted this picture of herself on Instagram. So thank you, Emma, for standing up for women by laughing and thank you to the women of Turkey who have posted their laughing selves at this hashtag: #direnkahkaha. You are all inspiration to me. Now I'm going to go have a good belly laugh with the children, just because we can. After we finish the peanut butter rice cakes.