Can I go find myself in India?

So I'm having an identity crisis and it's all my friends' fault. See, if you read Foreign Service blogs, then you know that there are basically three types of blogs they write.

The first blog is the type that gets all into what life is like in their country and they post photos of jack-o-lanterns they carve out of watermelons and palm trees that they turn into Christmas trees and photos of all the local festivals they go to which always look amazing and interesting and colorful.

The second type of blog is the travelog in which they post photos of all the amazing places they go to and their lives look very much like a Corona commercial and I can't figure out how to get posted in places like that and also I look horrible in a white bikini so that is not what my blog is going to be about.

Then the third type of blog is the one that I hate the most and can't stop reading because I love them so much: it shows things that people actually make in their actual country that is way, way better than anything I will ever make. These people post photos of amazing furniture and say things like "look at this antique looking bureau that I made out of popsicle sticks, string, and nail polish just by following instructions on Pinterest!" or "Did you know you can make pumpkin pie out of a can of kidney beans?" or "Look how easy it is to make mozzarella out of things you can find in your freezer!" I will never, ever make mozzarella out of anything but a block of mozzarella and my freezer has mostly bacon and gluten free flour and I defy anyone to make mozzarella out of that. Thank goodness my post actually has cheese, not that I can eat it anyway.

So I read these blogs and I think, that's what I should write about! And then go look at all my vacation photos which are sadly lacking white bikinis and are mostly of my front yard because we actually never go anywhere besides Goa (which is awesome but hard to photograph when you are running from the hawkers on the beach) and I didn't have time to take photos of Thanksgiving dinner because I was too busy re-cooking the raw turkey I almost served to people. And for Christmas we cheated and went to see Star Wars and then to dinner at the chicken place at the mall that the children will not stop asking to eat at. But I don't blame them because doesn't it look delicious? And also it's not raw. But who wants to read about that.


The problem is, there aren't any blogs out there about the under-achievers like me because who wants to read about a middle-aged woman who never travels anywhere, binge watches Marvel shows, and constantly fights to get her dog off of the couch? I think the only people who would read that are my mother and perhaps Child 1 when she is bored to death and homesick, so do you see my problem?

Oh, speaking of couches, you will all be happy to know that I won the Great Battle of the Slipcovers and the couches downstairs are a lovely red. Well, they are mostly red. Almost all red, except that they forgot to cover the huge throw pillows which are still an awful greenish gold and clash pretty horribly with the red couches. So I asked the housing officer if I was supposed to ask for the cushions to be covered separately because I thought maybe I did something wrong and she said NO YOU'RE NOT THAT'S RIDICULOUS and I should send her an e-mail and she would fix it. Did I mention that I love our housing officer? She is amazing and I totally am not just kissing up because we have an awesome house (we sooo do). She told me a story about a family who wanted to change houses because they saw a man-sized monkey on their roof, so I told her I felt cheated because there is not a single monkey on my roof and she promised to issue me a man-sized monkey the next time she gets one. And by the way, Happy Year of the Monkey!

But anyway, back to my topic about not knowing what to blog about, I'm just stumped. I feel stuck. I don't have writer's block, I just don't like any of the topics I think of well enough to say anything about them. So instead of writing, I just keep binge watching Marvel shows and playing thousands of games of Solitaire. I'm getting really, really good at Solitaire. OK, actually I suck. You would think that after playing it so much that I might finally get good at it, but I'm so slow because I keep doing things like helping Child 3 with her homework and telling Child 2 that yes that headband goes with her Pokemon T-shirt and fighting with my electronic personal assistant who won't listen to me and likes Husband better. Yes, you heard me right. Husband got me an Amazon Echo for Christmas and she goes by Alexa and she is EVIL and she is going to take over our house and kill us all, I am convinced. She ignores me all the time and yet Husband only has to think "NPR" and she'll tune right in, that little hussy. Oh, she makes me so mad! Why would you want to listen to NPR when there is a whole station with Imagine Dragons? Yet every time I say "Alexa, play Imagine Dragons" she says she can't find a Magic Dragon station and should she create one? Ugh!

Alexa is definitely not better than a brownie. But you know what is? Superbowl commercials! I was unfortunately not awake when this year's game was played, but thanks to the magic of the internet which sometimes works here, I got to see a Weiner Dog Stampede! So adorable. Totally does not make me crave hot dogs at all. Really. Not at all. Um, if anyone in Delhi has a Hebrew National, I will pay you a thousand dollars. (Not really. But I might go for 1000 rupees. Call me!) 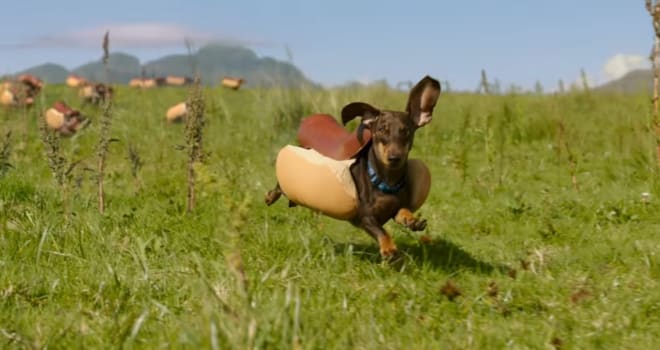