Is that "cha" the one that means car or tea?

Someone recently posted in a blog about how despicable it is that people at embassies overseas don't bother to learn the local language so that they can be prepared for emergencies. She said that when the RSO suggested in a meeting with American staff that they learn vocabulary that would help in in an emergency, there was scornful laughter. The blogger took this to mean that Americans can't be bothered to learn the local language. Excuse me while I stop laughing at that interpretation. It's not that we don't want to learn the local language, it's that the Foreign Service Institute in its wisdom insists on teaching words and phrases that are completely not useful in every day life.

As many of you might remember, my next post is in India and we are leaving in July. The Department has decided that neither of our jobs require language training since many people in India speak English. You might wonder if I am worried about not being able to communicate and the answer to that question is another question which is when has the Department ever sent me to a place with the ability to communicate in the local language? And the answer to that question is never. I have never had a full course of language training before leaving for Post, and I also suspect that even if I had, it probably wouldn't matter. Here are some phrases and things I learned how to say from studying language through the official language programs both at FSI and at Post.


Here are how many of those phrases I actually used in my job and/or life at Post: 0.

I had one friend on the visa line who insisted on asking applicants if they were terrorists because they had taught him that word at FSI and dang it, he was going to use it! The applicants mostly just stood there blinking because they couldn't figure out what he was asking. Because who talks about terrorism during a visa interview about going to see their new grandbaby?

Here are phrases I wish I had learned at FSI but which they do not teach.

On the morning that our pipes burst at 4am, husband heard them and woke up first. It was like a fire hydrant went off in our bathroom and it was the hot water pipe. He was trying to find a way to turn off the water and yelled for me to go call maintenance. It was while I was on the phone with the night guard that I realized I couldn't say pipe or burst or flood. So I just yelled water lots of water come quick! Then five minutes later I called back and yelled now! Come now! Water everywhere! And finally when the guard came, I dragged him into the house by the arm and showed him the waterfall down our staircase. Then he moved pretty quickly and got the maintenance crew to come shut off the water and fix the pipe. And no, I still don't know how to explain any of that in Chinese and it's not something I would ever learn in language training.

You know what is not better than a brownie? All this freezing weather and snow. If you're in the US, then you've probably seen Boston on the news. It looks like this. 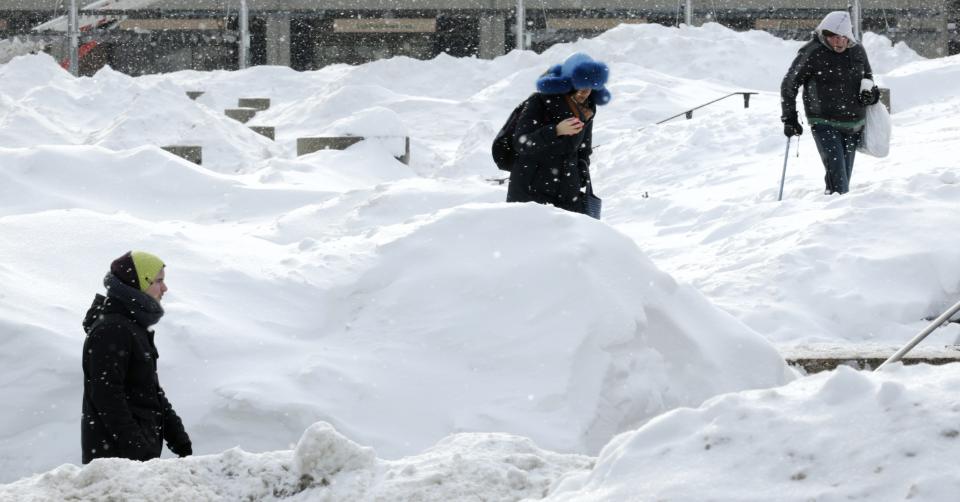 Now, DC, is not Boston by any stretch, but I am getting really tired of slipping on the ice every time I go out to walk The Dog. So, if the weather gods are listening, please bring us spring. Now. Soon. Because I keep having to wear my ugly mushroom coat which is really warm but ugly. Please, I need to wear the pretty green short sleeved sweater I just bought. No more snow! Or ice! Honestly, I can't wait for India. This move can't come soon enough. Now, somebody tell me how to say "how much are these and can I have two" in Hindi.