I don't care if I get detention!

Years ago, Staples had the best back to school commercial ever.  It was a dad dancing around joyously buying school supplies while his kids moped. If you're a parent, you can relate. I love back to school time! After months of whining about how boring our house is and how come everyone else is going to Canada for summer vacation and why don't we have a pool membership and there is nothing to do! After months of that, the kids finally go back to school and you can breathe, at least until homework is due. 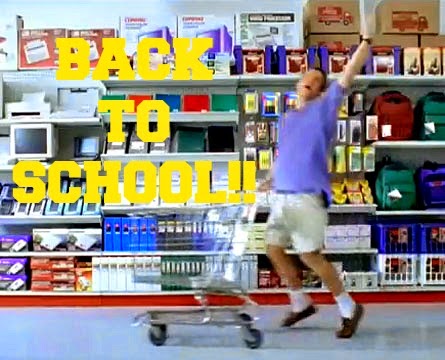 But as much as I love back to school time, the one thing I hate is Back to School Night. Or as I like to call it--humiliate the parents and make them feel stupid night. Because no matter how many times I do this, I can never, ever figure out the schedule correctly. This year was not as bad as the year Husband was in Afghanistan and I had to split myself in two and go to half and half at the high school. But it was still so bad I made sure to thank Child 1 for graduating and going to college in Hawaii so I only had to go to two BTSNs. Seriously, they make you run up the stairs and down the stairs and across the campus and then back and up the stairs and down the hall and by the time you find the stupid class, the bell rings and you move to the next one.

Last night at the high school BTSN, I got lost on the way to the band room and totally missed band which was the only class in which I knew anybody. Luckily, I wasn't the only parent lost. There were three of us wandering around in the dark. Then tonight, I lost Husband who forgot which floor was the first floor and was wandering around the second floor looking for the first. And the very worst part of all was the introduction of something called "social hour" which apparently is everyone standing outside in the heat eating foods I can't eat like cookies and sandwiches and socializing because they all know each other from last year except me because I'm new. So I hid inside the auditorium and messaged my friends pretending to be super busy and important so I wouldn't have to talk to anyone. It totally worked. Only I told the children about it, so tonight, Child 3 left me a note sending me on a scavenger hunt and admonished me to get out there and meet people for heaven's sake and how did she ever get such shy parents!!? So I showed her! I finished the scavenger hunt without talking to a single parent, and I even skipped gym and hid in the bathroom. So. There!

We also got a lecture from her language arts teacher on the improper use of run-on sentences and sentence fragments and I completely chose not to pay attention because I am an adult and I can do what I want. Whenever I want. Just because. Hmph! (Just kidding, Child 3. Listen to your teacher. Only grown-ups are allowed to write run on sentences.)

So going to BTSN isn't better than a brownie, but watching super fierce women break barriers is. Two women, Capt. Kristen Griest and Lt. Shaye Haver will graduate from Ranger school--something no woman has ever done before. And something many men have failed at. And they did it all with about a billion cameras taking their photo. So ladies, I salute you. I have carried many a person on my shoulders, but most of them weighed less than 30 pounds and they certainly weren't six feet tall. You are amazing and I hope many little girls will see you and realize they can be all they can be, whether it be in the army or the Foreign Service, or the classroom, or the boardroom. Rangers lead the way! Now someone lead me to my bed because BTSN plum wore me out.