I know you are wondering why I am blogging so much. She never blogs anymore, you say. And you are right. I have been very lazy and instead of blogging at night, I've been watching reruns of The Big Bang Theory. But now it is EER season, so I have the computer open and I'm ready to work on my EER, but I. Don't. Want. To. I hate my stupid EER. It's dumb and stupid and dumb. And boring.

So instead of writing how great I am at my job, which I really actually am, not to brag or anything but I so am. Instead of doing that, I'm going write about my job without actually writing about my job. Don't worry. It will all make sense. You see, I have a job that everyone thinks is easy, and actually, it's not that hard. But it takes patience and attention to detail and you have to follow the rules. We remind people of the rules all the time, so they should all be just fine. Anyone who listens to me can do it; the problem is the actual listening. We used to joke that a trained monkey could do our job, but the problem with monkeys is attention span, and the whole throwing feces thing which would be frowned on at the Department. No, this job isn't for monkeys, because it requires extreme attention to detail and remembering the rules and listening to the voice of experience which apparently is really, really hard.

So it's like this. Say someone gives you a page of numbers and says you have do simple subtraction and multiplication alternating on every other one. Sounds simple, right? So you do. You finish in record time. And then they give you another page and then another and then another. And you get bored after the 1,000th page and you decide to start using algebra because you can and you are bored. And then I ask you why are you using algebra instead of subtraction and multiplication. And you say because you are smarter than that. And then I sigh and remind you that you need to do only what we asked you to which was multiplication and subtraction. And you then throw a fit and tell me how much better you are than me or this stupid job. That is what I deal with every day. Except sometimes the officers veer off into calculus and trigonometry and some of them appear to be painting by numbers and doing no math at all. This is an awesome painting with numbers, but it is not math.

So that is why it's so lovely to come home at the end of the day and have children who listen to me and do what I ask. Oh. Wait. . . I do love the children and today they even helped with dinner and dishes, although I had to bribe one of them with chocolate. Maybe I should start bribing people at work with chocolate.

You know what is better than a brownie? Finding a lost Fabergé egg. 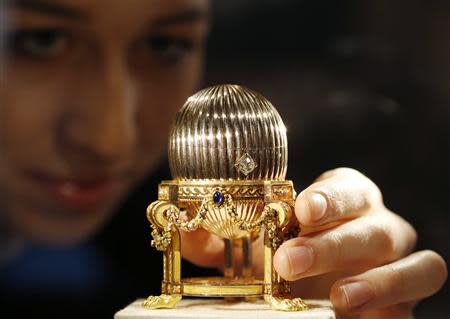 Someone actually bought this to sell for scrap and only found out it was a lost Imperial Easter Fabergé Egg and is worth millions when they looked on the internet. Awesome. Now I've wasted a whole evening blogging when I could have been working on my EER. Job well done.