"Cheat" is the same in any language

So I promised I'd blog about my Africa trip and I really meant to once I was over jet lag which was exactly when I threw out my back and I've been pretty much doubled over in pain ever since which makes it really hard to type on a laptop. But it's a little better now, so here is what I learned about Africa.

The Congo River looks like this and there are no hippos, at least not that I saw.

The ferries on the Congo River look like this. Thankfully, I didn't have to take the ferry, although I did have to climb through them because they were crowding the dock. 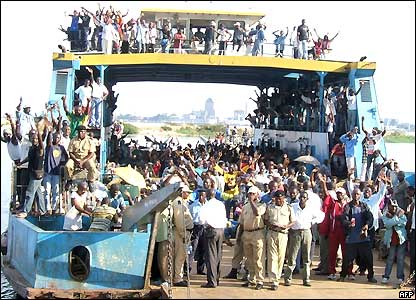 I can bargain in French! It's pretty much the same as Chinese except when I said I wanted my change they gave me a giraffe instead. I'm pretty sure that "change" is not "giraffe" and that "giraffe" sounds like "giraffe" in French. But I accepted my defeat graciously and my driver said it was tres jolie which means very cute. And it is quite cute. It's in our living room now.

African men respect larger women and because I was the largest, apparently everyone always thought I was in charge. I got the nicest chair every time if by "nice" you mean not filthy enough to make you want to vomit but still you need to sanitize after using it. And they gave me drinks and made sure the fan was blowing on me. I totally could rule Africa.

Gabon looks like this. Although I wouldn't know because I spent the entire time working or hanging out with friends which was way better than sight seeing.

And I hear that Cameroon looks like this. But again I was working. 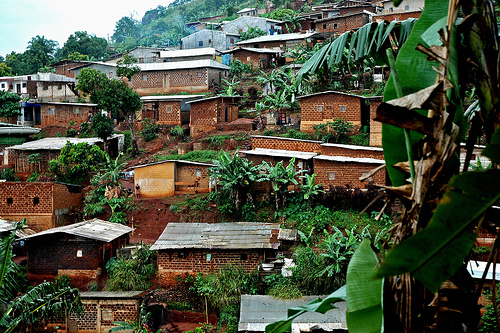 The food was great, mostly because I ate steaks and french fries every night except when I had fish steamed in banana leaves with plantains. I learned that "brochette" means kebab, and I drank lots of tonic because I figured the more anti-malarials I got the better. Also "farine" means flour and when you tell people you are allergic to it in French, they look at you like you're stupid--just like in English! No one in Africa has heard of gluten intolerance. Non-smoking rooms included ash trays and matches. And I got sprayed with insecticide on every single flight. It was awesome, but at the end of two weeks, I was really ready to come home.

Now it is EER season and I have to find things to brag about and I no matter how many times I have to do this, I will always, forever, sincerely, from the bottom of my heart absolutely hate writing my EER. Seriously. I'd much rather ride on that ferry, which is so not better than a brownie. And you know what else is nothing like a brownie? Falling on the runway. But even worse is having someone make you look like the Red Queen of Wonderland while you're tripping over the impossible shoes.

Somebody give this woman some crutches. And some pants.
Posted by Jen at 6:35 PM