I don't think we live in the same universe

Today I discovered that not only can you re-name a Kindle, you can name it whatever you want. Child 3 is the awesome discoverer of this feature. I actually heard her on the phone telling Child 1 how to do it.  Child 1 named her Kindle "Child 1." So today when I looked up Child 3's kindle on Amazon so I could buy a book for her, I saw what she had named it: Child 3's Kindle... OF DOOM! I love my children.

As Artemis reminded me tonight, It's Miss Universe time again! You know Miss Universe, it's where Donald Trump chooses the most beautiful woman in the whole universe, which pretty much fits with his ego. Although other planets are probably evolved enough that they don't judge a woman's worth based on how big her thigh gap is or how much cleavage she is showing. I don't watch the pageant, but I do love looking at the National Costume Show that is part of it. For this, women are supposed to dress up in something that represents their country. Now, that can be a little tough if you don't have a national costume. When my kids were in international schools and supposed to wear national costumes, I sent them in Old Navy Flag T-shirts and jeans. The Dutch kids usually wore orange, and one little British boy wore a three-piece suit once. With the National Costume Show, it's much the same. So we get lovely, beautiful dresses like these. This is Miss Lebanon and I would totally wear that dress. This is Miss Slovakia. Beautiful and very evocative of porcelain, which I assume is what they were going for. 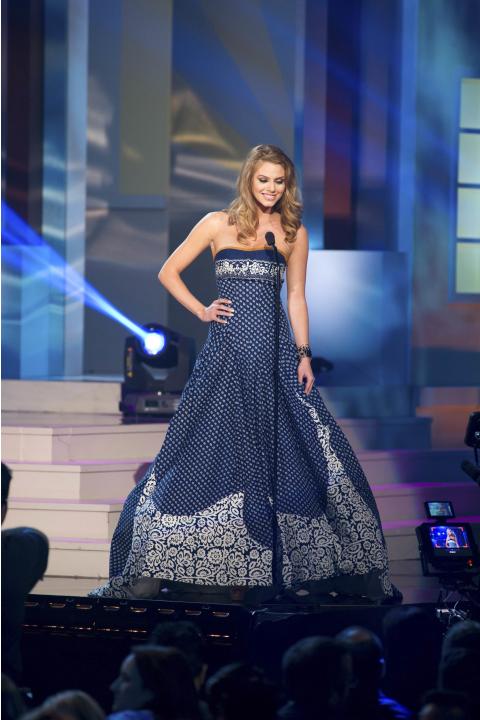 And then there was this. Because apparently Great Britain thought this was a Halloween Party and nothing says sexy like a fake bear fur hat.

And our neighbors to the North will need to explain this travesty. I know y'all love hockey, but come on! You missed a penalty there.

But the USA won the preposterous award with this--really the worst costume possible. What happens in Vegas is supposed to stay in Vegas!

I suppose a Vegas showgirl is representative of my country, but it would have been way better if she just wore the Old Navy T. Feathers? Really? What about ostrich feathers says "America" to you? It just makes me very, very sad.  And it's actually not flattering at all. So here is my plea.

Dear Miss USA fashion people. Your boss lives in New York which is the fashion capital of America. You can do better. Just ask someone! Anyone in New York! Or take some inspiration from this dress Betsey Johnson sketched for the First Lady. Awesome, no? Something like that would totally work. I bet she would even let you add feathers.

But so that you don't leave off reading all depressed, I leave y'all with this. Miss South Africa. Beautiful, cultural, and did I say beautiful already? Definitely better than a brownie. That is sequined zebra print silk chiffon, and I might need some. That is a real dress, people. Miss USA--back to the drawing board!