I am doing a lot of French homework lately, or as we say in French, devoir! Normally, French would be very useful for me because I travel to Francophone Africa a lot, and as you know, I love it. I love the food, and the people, and the officers at the embassies that I've worked with, and the animals, and the experience of L'Afrique. Remember that giraffe that I got as change in the Congo? So I do spend some time before each trip brushing up on my bad college French so that I can follow conversations and nod in all the right places. But my next trip is not to L'Afrique, but to Allemagne, which if you speak French you know is Germany and they do not speak French there. They speak this: What you may not know, or may have forgotten, or perhaps I never really mentioned it, is that I did at one time speak German, and at one time, I was fluent and probably could have told you what this said, but now all I can make out is that it's the 25th of March, 1763. Because after I lived in Austria and got pretty fluent, then came the Norwegian and then French and finally Cantonese and Mandarin and now I can't say anything at all in German, but I can understand the news on TV. So I am trying out a new "Learn to speak German" app on my phone and we'll see if it is helpful. Really, all I need to be able to do is order from a menu, which I think I can do, and then ask if it is gluten-free which I am certain I cannot. So I have some brushing up to do. Geben Sie mir hilfen!

You know what is not better than a brownie? Crimped hair, which I hear is making a comeback. Supposedly, it was on the runway for Stella McCartney, who has excellent taste and also good sense, which makes her an extraordinary designer. But the problem isn't that models on the runways may have crimped ponytails. The problem is that if you give some people a crimping iron, this happens. 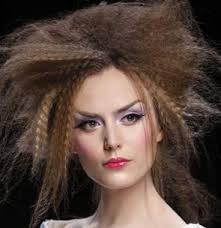 I do love feathers, especially when poking out of a hat, but not when it's my hair. And red crimped hair = feathers. So designers, please, I'm begging. No crimping! Women are not birds and we should not have hair that makes us look like owls. Or eyebrows like Vulcans for that matter. So not flattering.