Migraine again this morning. Seriously, I need to start counting the days that I don't have a headache. They are getting to be fewer and fewer. Surprisingly, OK actually not surprising at all, I didn't have a single migraine the entire time I was in Hawaii, despite being in the sun all the time. I drank a lot of water and juice and diet Pepsi so that might have helped, but it is extremely stressful setting your daughter up for college so far away, yet not. one. migraine. Huh. So maybe I need to just chuck it all and go to a place that is sunny and lovely and I'm happy being there every minute. Oh yeah. I have to pay for the college in Hawaii. So I'll just have to suck it up and deal with the constant stress and commuting and headaches and whatever. I so want to go back to Hawaii!

So today we went on the most epic shopping trip to the grocery store ever! According to Child 3. What we did is we went to Target and bought groceries. But apparently if those groceries include things like pumpkin spice chips for making cookies and maple frosting, it is epic. I told Child 2 that yes, since she got her braces off she could buy Jolly Ranchers and she said I was the most awesome mom ever and the woman standing near us in the aisle said wow she wished her kids felt that way. And I told her that apparently letting your children buy candy is the key and she laughed. But I wasn't really kidding. I am totally willing to buy their love with a $2.50 bag of candy if that is all it takes.

So then we got home and Child 3 was bored so she decorated the house and now it looks like Halloween threw up in our living room. There are ghosts and streamers and bats and cauldrons and pumpkins everywhere. I had forgotten we have this much stuff. But she is happy about the way it looks. I just hope people don't trip over the pumpkins on the stairs. Maybe we should move them before I break my ankle again? At least we don't have this many. 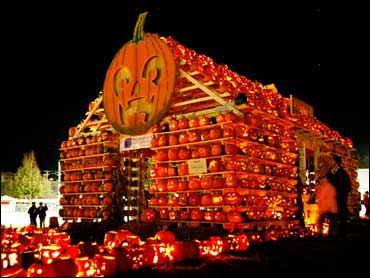 For dinner, I drove out to our old stomping grounds to meet the other moms from Child 1's playgroup when she was a baby. Two of them made it and we all commiserated about how hard it was to send our babies off to college. Except that their daughter's are both going to schools that are less than a day's drive away and mine is on the other side of the world. Yes, I know you are thinking that it is my own fault but I am not the one who put Hawaii in the middle of the Pacific Ocean because geography!

Then finally, we Skyped with Child 1 and it was so hard not to be able to reach through the computer to give her a big kiss. She is doing well and is having a lot of fun, making friends and finally admits that being from Virginia is kind of cool and she misses it. Ha! So, Skyping with family members on the other side of the world is better than a brownie, and so are the gluten free sugar cookies with maple frosting that we are making tomorrow. At least I hope they will be.