Just call me the Master Poacher

We had a late dinner tonight, so I thought I'd cook Italian and I made risotto with poached eggs. Husband said you figured it out! Yes. Yes, I did. I am an egg poacher now. And I'm proud of it. Child 3, who was the only child eating with us, was impressed although apparently my eggs were softer than the kind her grandmother makes. But that was on purpose. If I wanted hard boiled eggs, I wouldn't be poaching them. Also, they wouldn't go very well with risotto.


The risotto, however, was not a hit. Child 3 apparently does not like risotto. Or seafood. We learned about the seafood at the beach. We were eating boiled Gulf shrimp which are large and delicious and she first complained that they weren't deveined and then told everyone that shrimp don't have veins and that black line was actually poop (which is true, but she shouldn't have reminded everyone about it.) And then she took one bite and said she didn't like seafood. I asked her then how we were going to have a restaurant in Guam if she didn't cook seafood. Then she said she would cook it but hire someone else to taste it. I highly suspect that someone else she has in mind is me, since I'm going to be doing most of the cooking anyway. I'm still not very sure about this plan.

We saw lots of old friends today. Some were at the farmer's market, which was so fun. I love the farmer's market and I love that I ran into friends from China there. And some were at a barbecue. We have lots and lots of friends arriving from various corners of the world and this year should be so much better than the last, especially since there will be no one in our house traveling to Afghanistan at all. The entire year. Unless it's me, but it won't be because I won't volunteer for that one. Cairo? Sure. West Africa? Definitely. But not Afghanistan.

This Minnesota Vikings quarterback and his sports reporter bride did something on their wedding day that made me laugh out loud which is better than a brownie. 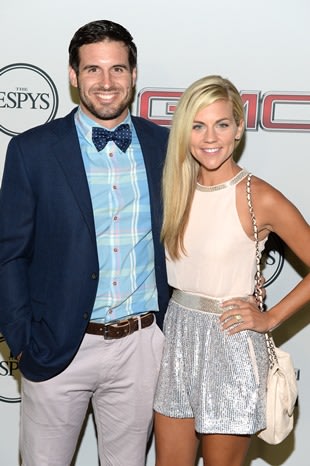 No, not that! Honestly. They ate their first dinner as a married couple at Arby's. Which is exactly what Husband and I did. Only that was a long time ago before I was allergic to wheat. No. Seriously. Arby's. We were really hungry after the reception/party which was really much more of a party than a reception so it was perfect. And there was a lot of food, but the thing you forget about weddings is that the bride and groom don't get to eat much because they are going around talking to all the guests. At least, that is what happened to us. But at any rate we were starving at the end so we went to Arby's. So kudos to you, Mr. & Mrs. Ponder. I hope that your marriage is as long and as happy as ours and that it involves nothing about Afghanistan.
Posted by Jen at 7:09 PM