I forgot to mention that FSI stands for Foreign Service Institute and is the place where diplomats go to feel badly about themselves because no matter what they do, they can't pass the stupid language test. There are all sorts of great courses at FSI, but most people are there to study language. And you would think it is the best language school in the world, but it is not. There are serious problems with the teaching methodology and don't even get me started on the issues with the testing and how the teachers kind of get paid to not pass you. Ugh.

But at any rate, FSI did work its reunion magic again today and after I got finished teaching my class (which I rocked at, btw) and I ran into four friends and one of them want to hang out on Sunday. Yippee!

Child 2 is chatting with me on facebook and sending me stickers. I sent her this one. 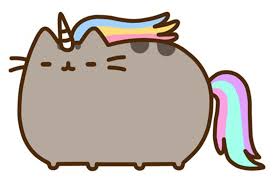 Not because she loves unicorns, but because that is the weirdest fat cat unicorn I have ever seen and it would make her laugh. Then she sent me a cannibal bunny and now I am afraid that I have encouraged her too much in the dark side of humor. But it's alright. There is hope. She also sent me this. Child 2 loves sushi.

But the best surprise of the day wasn't that Child 2's birthday party went really well and the kids had fun, but that one of my friends whom I haven't heard from in a while called to say she had moved close to me and wants to get together! We spent more than an hour on the phone catching up and it was just like old times. I love friends like that--that you can be apart, but when you see each other again, you pick up right where you left off. Good friends are way better than brownies, and I'm lucky enough to have more than a few.