Today was pretty productive and I can tell because I am completely exhausted. First we left at 8, that's am, to pick up Child 3 who was at a slumber party with a friend from our last post at their house which is 45 minutes away. Then we rushed her back to play practice and made a grocery run. Then I finally went to Michaels and managed to replace some of the broken ornaments. Then I rushed back to pick up Child 3 from the practice and ran some errands on the way home.

And then we made apple crisp--gluten free of course, and rushed off to the church Christmas party to not eat lasagna and watch Child 3 perform in the Christmas pageant. I should mention that although everyone else was eating lasagna, Stevie and I had arranged to share food, so she brought delicious gluten-free skillet lasagna, and I provided the dessert which we did not put on the dessert table which was a good thing because if we had, we wouldn't have gotten any to eat. Then we discovered there were other gluten-free families doing the same thing and we traded some of our dessert with them for some of theirs which Stevie ate and said was delicious. (It all had chocolate.)

But anyway, back to the play. You have not lived as a parent until you've put bunny ears on a three year old and pushed him out onto a stage in front of hundreds of people with the instructions not to cry or wiggle. I'm not sure if there were bunnies at the manger in Bethlehem, but that 3 year old rabbit was cute. These were not our kids, but  you get the idea. I think the girl on the right is a donkey, but is the other one a duck?

Child 3 was a "Believer" and had some sort of brown fringey costume and ribbons in her hair. I'm not sure where the ribbons came in Birth of Jesus, but those were our instructions, so we ribboned her up. She looked adorable.  So then we came home and put up some more Christmas lights and now the teenagers are having a fire pit party in the back yard. That was their reward for attending the pageant without whining. I'm exhausted.

This hat is not better than a brownie. 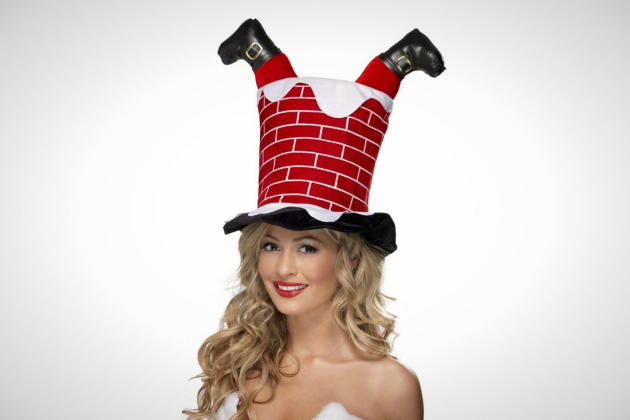 I guess based on the model, that I am not the intended target, but then again, I'm not sure how many 20somethings wearing strapless fur dresses would go for a chimney hat with Santa legs either. Honestly, who thinks up these things and how can they possibly make any money?