Snow day! Or rather ice storm day. It looked a lot like this. Actually, it looked exactly like that because Child 2 took that picture.

It was a delayed opening/uscheduled telecommuting/liberal leave day. Since I have a new little device that will let me log in to my desk from home, I decided to try teleworking. And it was awesome, if by awesome you mean that I spent hours and hours installing and uninstalling and reinstalling the same stupid program that never, ever worked, and then spent more than an hour on hold with the computer people trying to figure out what was wrong and finally got it to work at 4:45pm, then yes, it was totally awesome.

I gave up in the middle and took the kids to see "Frozen" which we loved because it was set in Norway and it's main character is a redhead, so it will end up being about 5 hours of trying to telework and 3 of liberal leave (which no does not mean leave only for liberals but that you didn't have to get advanced approval.) But anyway, back to "Frozen." It was delightful and full of visual references to Norway, which I still love and miss so we had Norwegian meatballs for dinner. 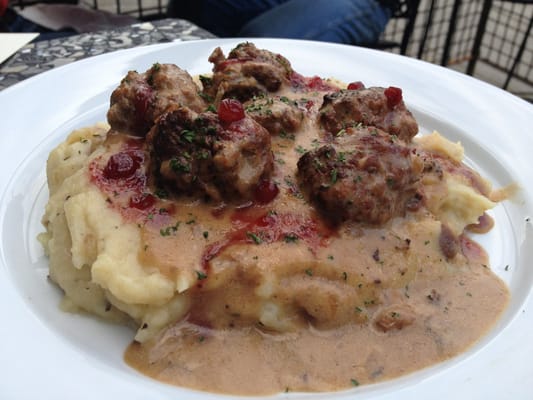 Yes, that is cranberry sauce on there. Don't judge--it's delicious.

But the very best thing about the day is that they are actually predicting snow again tomorrow and the transformer blew at the school, so the children will probably have the day off again, too. I love snow days when I actually don't have to go out in them. They are better than brownies.
Posted by Jen at 6:04 PM