Two snow days in a row! Awesome. School was closed as well, so we did a lot of stuff around the house, like get flu shots and have eye exams. OK. So we didn't spend so much time in the house, but I did get a lot done. First the flu shots which Child 2 is still angry about, then some grocery shopping. Then putting stew fixings in the crock pot and working for a few hours now that my FOB (no idea what it stands for but that's what they call the thingy that lets me log in from home.) Then eye exams and some Christmas shopping and three new pairs of hipster glasses. None of them for me because I don't need glasses but apparently all of the children do. We got two tortoiseshell, one pink, and one black. I know that doesn't add up. I'm not that bad at math, but one of the tortoiseshells has pink temples. These are hipster glasses, in case you didn't know.

Then home to eat and clean out a couple of boxes of stuff that don't fit anywhere. I managed to get it into one box which I think is pretty impressive and since the other box is broken and is plastic we can recycle it and feel good about taking care of the planet.

Speaking of taking care of the planet, China is doing a pretty poor job. So poor, in fact that models on the runway look like wannabe surgeons which is not better than a brownie at all. I mean, look at this poor girl. 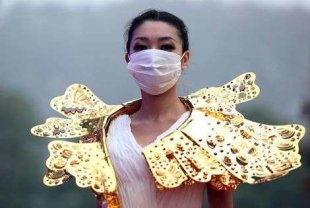 It's bad enough that she has to wear a mask, but now she needs some kind of armored wings to fight pollution. OK, those are really not pollution fighters, that is part of the dress or whatever she's wearing. But really, the mask part is very sad. They are awful and uncomfortable and this kind probably doesn't work well because it doesn't actually filter the air. So get your act together, China, and in the name of fashion clean up your air. And also stop rationalizing that the pollution is good for China because some armies use smoke on the battlefield to obscure operations. (Seriously, they said that.) Unless your country is currently completely at war everywhere, you don't need the smoke. Also, it's cutting your life spans considerably and it will cost you a bundle in medical costs. So if the bad fashion doesn't scare you, 1.3 billion people with asthma and lung cancer should.