It was a lovely fall day today so we broke out the fire pit and had foil dinners. The children love foil dinners. I love them because they are easy, and I love the smell of smoke in my food. Also it took away the smell of chocolate chip cookies that permeated the house all day after Child 1 made some. I love the smell, but today, it just reminded me of all the things that I can't eat. So to keep my mind off it, the children turned on Duck Dynasty.

I have to admit that I had resisted watching this show, until Sister-in-Law 3 told me how funny it was, and she was so very right. It is hilarious. I don't know what it is about the show, but that uncle is crazy. Watching him take his brother and sister-in-law on a trip down memory lane that contained no actual memories and a lot of looking at trees that meant nothing was side-splitting. It doesn't make any sense that this is a show, but I'm so glad it is.

But back to fashion. This outfit from NY Fashion Week is not in any way shape or form better than a brownie. I would put it on a par with brussel sprouts which I do not like, no matter how you cook them. I keep trying them thinking this time will be different, but no. I still don't like them, Sam I Am.

Those are the brussel sprouts. This is the outfit that reminds me of them. Awful, no? I get that designers want to be avant garde and that they want to "push the envelope" although I don't know what that means. But at least you shouldn't make your models embarrassed to be photographed. This poor kid looks like he's about to cry. Someone give him a brownie, quick! 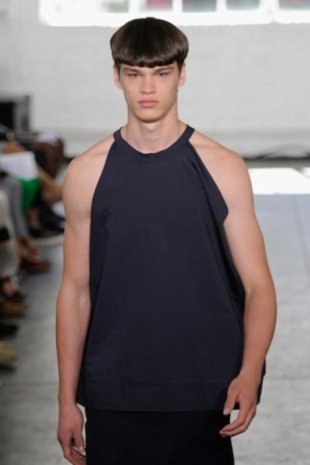