I was wrong, but not the wrongest of the day

I am not often wrong. OK, I am wrong a lot (don't tell the children!) But in this case I offended people whom I didn't mean to offend and I should not have implied that no one at all is reading my blog. Because, as my friend "Brynn" pointed out, she is not no one and neither are any of my dear friends and loyal blog readers. You are all "someone" and very important to me. So I will no longer complain that no one is reading my blog. Because the accurate complaint is that no one who lives in my house and eats the food that I buy and cook and wears the clothes that I purchase and is driven around by me reads my blog. Because they are all to busy. They are also too busy to set the table, do the dishes, or walk The Dog. So the only person in the house who is allergic to The Dog does it. And does the cleaning, and cooking, and driving, etc. Because apparently I am not too busy at all and oh, let's volunteer Mom for every possible thing we can think of including field trips and dance classes, and the church choir. Because I don't have enough to do because obviously I can do everything.

And because Brynn commented, here is something I think she would like. It's a cotton quilting print with pictures of vintage fashion patterns! I think that's a home run, and if you know Brynn, you will agree. 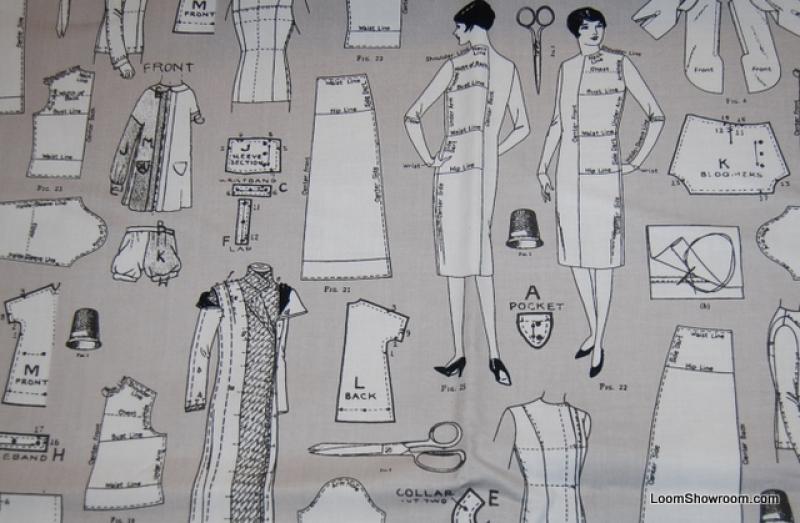 OK, enough ranting about the children and Husband. Even I'm bored with the ranting. Let's talk about goats, specifically screaming goats which I did not know exist and showed up in the car tonight. See, Taylor Swift has a song called "Trouble" which someone on YouTube has thoughtfully turned into a video of goats screaming, so that when the song comes on the radio, children from every corner of the mini-van start screaming like goats. So no we have a rule that there is no screaming and no goats in the car and definitely no screaming goats. So then they started mooing. I have very snarky children.

Now it is late and I am tired and I'm going to bed. You know that I love fashion and that I also work for the Executive Branch--the part of it that runs foreign policy. I have mentioned before that fashion and the Department mostly don't mix well. But the reverse is also true--fashion magazines don't understand foreign policy and a clear example which is not better than a brownie is saying that the North Korean Military is a chic trendsetter. I know! That is probably the dumbest thing ever to come out of a fashion mag and these are the people who are responsible for this! Kermit is not to wear. He is to sing with.

And this is what a North Korean looks like, and I'm not seeing much fashionable here.

OK, Elle Magazine, just exactly what is it about North Korea that you find chic and trendy? The assault weapons? The way they throw innocent people into the gulag to die a slow death of starvation and disease? Or is it the way that the military steals all of the resources so that the generals live like emperors while the average soldier hardly gets enough to eat? Or maybe it's the way they shoot deserters or really anyone who complains. Yeah. That's fashionable! Shame on you, Elle. Years ago, I used to subscribe to your magazine but that was before you fired your politics editor. Now I'm very glad I don't anymore. And seriously, if you wanted to find some chic military outfits, I could have pointed you in a hundred directions--none of which point to that dark area above the 38th parallel. Try Greece, for example. Now there is a fashion mag worthy uniform! I would totally go for that tassel. And the skirt is awesome! Can you call it a skirt? Maybe if you're carrying a gun, it isn't a skirt. But whatever, it is totally runway worthy.